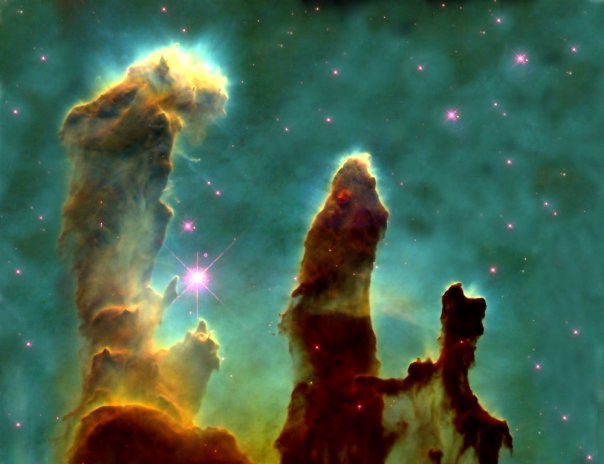 " . . . . The Seven Elohim are mighty Beings of Love and Light Who responded to the invitation of the Sun of this System and offered to help to manifest the Divine Idea for this System, created in the Minds and Hearts of our Beloved Helios and Vesta  God and Goddess of our physical Sun Itself. Through ages of time, the Elohim have learned how to successfully use the creative powers of thought, feeling, spoken word and action as God intended them to be used from the beginning and, in cooperative endeavor, the Elohim drew forth our entire System in perfect manifestation, of which System the Earth is just one small planet.

"Upon the Earth today, one of the great requirements of the Lifestreams evolving here is to raise them out of human limitation, which mankind have drawn upon themselves by the forgetfulness of their Source, Its Divine Plan of Perfection for them and how to fulfill that Plan. The only way to permanently raise any lifestream out of limitation of any kind is to teach him how to transmute his "old" causes of distress by the use of the Violet Flame and then set into action new causes (mostly invisible) which will create new effects for him in this physical appearance world, expressing as opulence, peace, good health, wisdom  on and on  ad infinitum. No type of subsidy and no means of security is ever permanent until it flows forth from the consciousness of the individual himself; because the gifts from any other members of the race are the effects of the benefactors' consciousness and, thus, only temporarily loaned to the beneficiary.

"So, to enrich the consciousness of the individual until he becomes Master of his own energy within himself and learns to create causes which will manifest as these constructive effects, the Elohim graciously have chosen to present to mankind the Science  the way and means  by which They achieved the manifestation of our Solar System.

"Call to these Great Elohim in all the sincerity of your hearts! Daily invoke Their Light and Understanding to come into your own consciousness! . . . ."

"ELOHIM" is a Hebrew word meaning "God" - used 2,500 times in the Old Testament. It is a uni-plural noun that refers to the Twin Flames of the Godhead - the "Divine Us" Who "in the beginning" (Gen. 1:1) created male and female in Their image and likeness (Gen. 1:26, 27). The Elohim embody the Light of the Father-Mother God, whom They personify on each of the Seven Rays.

The Reverend C. I. Scofield, in his commentary on Gen. 1 :1, writes: "Elohim (sometimes El or Elah), English form 'God,' the first of the three primary names of Deity, is . . . formed from El = strength, or the strong one, and Alah, to swear, to bind oneself by an oath, so implying faithfulness." (7)

"Beginning in the Heart of the Great Central Sun, Hierarchy manifests as the stepping-down of the Energies of Alpha and Omega, of the Sacred AUM, of the I AM THAT I AM that is the Fiery Focal Point for the whole of creation, the whole of the cosmos. The Elohim and Cosmic Beings carry the greatest concentration, the highest vibration of Light that we can comprehend in our state of evolution.

"The Seven Mighty Elohim and Their Divine Complements, their Feminine Counterparts, are the Builders of Creation. It was They who responded to the Fiat of the Lord God 'Let there be Light: and there was Light' and the Fiat of Creation to create the worlds. . . . " (6)

All Twelve Rays of Light and Life:

Copyright © 2014 by Ascension Research Center - with the exception of credited quotations. Third party material used on this website is quoted for the purposes of scholarship and research from sources which are either in the public domain, or within the bounds of fair use. Disclaimer: This website has not been endorsed by any author or copyright holder of the works discussed. No connection is implied nor should be inferred.