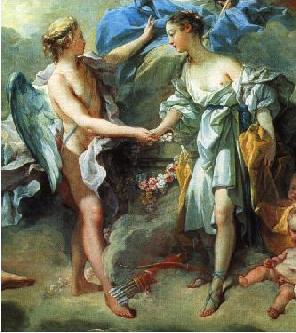 Detail from The Marriage of Amore and Psyche
by François Boucher (1703-1770); Louvre, Paris

" . . . Look around you, precious ones. Look at all of life moving - or so they think - toward the Center of God. You will find that that which prevents so many souls from entering into the joy and the enthusiasm of the Science of the Spoken Word is selfishness itself and all of the demons and discarnates who reinforce selfishness as sloth, as lethargy, as darkness within the consciousness of those who cling to it as though it were their very life.

"You will notice, then, that souls who think that they have the quality of God and of the Spirit are in fact psychic, possessing psychic frequencies and phenomenon, and they move in spiritual circles but they are not representative of the Holy Spirit. And so there always has been - on Lemuria and Atlantis and through the centuries - those who have walked a pseudo-path of religion and a pseudo-path of the science of religion. And with their "free-love" philosophy and their freedom to be anything, come what may, they have led astray the sheep of the fold.

"Yes, you have heard this theme but I speak it again for I speak for the transformation of worlds. I speak that you will know and know again and again that in order to have Love you must have consecration and you must be willing to be stripped of the adornments of the lesser self especially when it comes to matters of spiritual pride as well as material ambition. To walk in the way of those who would be the fulfillment of the Law of Love - this is your calling, this is Our calling to you.

" . . . In truth, it does not require all types of hardship and deprivations of the self to achieve the Path of Attainment, but it requires a steadfast moving to the Center of Love. It requires devotion, but not necessarily austerities. Love is a Freedom to be your Real Self. That is the complete Freedom of Love. To do anything you want as long as your doing is the Real Self - this is Free Love. It is practiced by the Elohim, for We are the Real Self of God in manifestation. And when you know you are that Real Self to the fullness in every Sphere and Center of Being, God will come to you out of the lightning and the thunder and from out the 'still small Voice' within, and you will no longer wonder when, oh when you will have the Power to change the worlds, for the Power in you will be the change - and the change before your very eyes. It requires but a little by measure.

"I speak the echo of Hercules, but I come with an echo of Love from out the Great Central Sun. And now the Angels of the Central Sun, who have formed a giant Spiral over this forcefield - spiraling around this tent of the people Israel, spiraling higher and higher - are ready to release into your hearts a Spiral of Love for the transformation of whatever world with which it comes in contact. According to your vision, so will the action of your Love-Spiral be. If you would transform an anthill, so an anthill it shall be. If you would transform your community, your nation, your earth and solar system, so it shall be. For the Spiral of Love of the Angels of the Central Sun, and of the Elohim, is for your certain Victory won in Love in the Holy City."