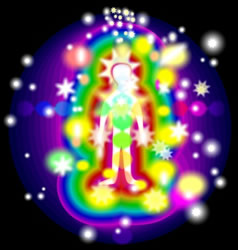 Not lightly did the Great Incarnation of Light say: "Condemn not." All the way down the centuries, since the dawn of time, have the Great Lights in the world of men given us this same command. Think you then, that it was idle daydreaming or accident that the human side of each individual should be reminded again and again, in every age to "condemn not - judge not - criticize not?"

The Great Ascended Host of Superhuman Beings and Angels, the Great Ones Who have guided humanity on its path to Perfection from its infancy, have throughout eons of time, reiterated those Commands; and they are still this very moment just as much Cosmic Laws to all humanity here and elsewhere as they were the very first time they were spoken forth. They apply to every human being on this planet and there is no such thing as an exception. If we will exercise our mental muscles a little it will not be difficult for us to grasp the reason back of this Cosmic Command. First, from the standpoint of each of us, for that is the nearest thing to us, we do not want to create thought forms with which we fill our own auras with anything except what is going to bring us harmony, happiness and blessings. Everyone's primary impulse in life is to be happy. That is our birthright and our Divine prerogative. Harmony is the fundamental Law of our being. Therefore, if we think, see, feel or speak an inharmony about any other part of creation, we are that moment building thought forms of mental substance and energizing them with our feeling and thought.

This is not conjecture. Thought does build form. That Law, we cannot possibly escape. Just because the average person's eyes do not see the form immediately, is no proof that it does not exist. There are some, whose faculty of sight has been attuned highly enough to be able to see thought forms in the aura of others, and sometimes their own, have been shown them.

The day is not far distant when a mechanical device will be built which will as surely show people their own thought and the form it takes, as the mirror now shows them their bodies. This takes no stretch of the imagination to prove it. Is not the airplane of today but the physical form of the thought of the airplane of yesterday? Is not the present Panama Canal but the form of the thought of the Panama Canal of a few years back? Is not the present city of New York but the form of the thought of the city of New York in the minds of the people of New York of a few years ago? If enough human minds think revolution, will not the form of revolution appear in the political life of any community? Just as surely as this Law manifested in the past, just as surely will it continue in the future - in the body, aura and affairs of either the individual or group of individuals. As the individual fills his own aura and world with his thought forms, so does the group build the group thoughtform which is but an aggregate of the thought forms of the minds composing it. Do you not see what a serious thing happens when we think? Therefore, let us stand guard at the portal of our thought as the Angel of old with flaming sword to consume every thought form which does not contain the pattern and manifest peace, harmony and blessings to all mankind.

If we would be protected, must we not also protect? If we refuse to think a thought of imperfection about another, we are directly recognizing the Diamond Self of him and it will that moment, act forth to us through his humanity. Learn to bless your own Diamond Self in every other human being and as surely as you do it only that Self can possibly act back to you. It works. Try it.

Can the Diamond Self of us cast its perfect pattern upon the mind if that mind is filled with thoughts of criticism, condemnation, hate and judgment of itself and others? Through a soiled window His Light does not shine. Your mind is the window through which your Diamond Self looks at the world around you. Clear as crystal should it be if it is to pour forth His Glory to the world. We cannot receive thoughts of perfection from our Diamond Self if we keep the mind and aura filled with thought forms of imperfection any more than the north pole and equator can exist at the same point on our globe.

There is nothing in this universe which compels us to think what we do not want unless we either refuse to use our will or give it into the charge of some directing agency outside ourselves. Therefore, we do have absolute and complete control over the creation of the thought forms with which we fill our own world. It should be our fundamental business in life to definitely determine that we will only build thought forms that shall go forth to heal, to bless and to prosper.

Determined effort to listen only to our Diamond Self, for from It comes only thought forms of perfection, and think only upon its Divine Design will bring all and more of peace and health and happiness than we can very well imagine in our present state of existence. Every thought which does not contain perfection emanates from something less than your Diamond Self and is not your friend.

Our thoughts are our children, our progeny, and since we have given them birth, we alone must redeem them and carry them up to the perfect standard of our Diamond Self. Thoughts of Perfection have the power to bring balance and transmute all unlike them into themselves just as light does the darkness. When we turn on the light, the darkness does not go somewhere, it simply takes on the nature of, and becomes, light. So do thought forms of perfection change thought forms of imperfection into themselves by absorbing the energy and substance contained therein.

Perfection is more powerful than imperfection, else the human race could never have evolved into anything higher than that from which it started on the human side of its evolution.

Let us, therefore, obey the eternal Command of all Masters of Light and Wisdom and in the words of the Master Jesus Christ, we close and with Him say: "What I say unto you, I say unto all: Watch!"

This article by Edna Ballard is presented here as originally published in her privately printed newsletter from Chicago, The American Occultist, Volume 1, Number 7, July 14, 1930. She gained Her Immortal Freedom in the Victory of the Ascension, reuniting with God's "I AM Presence" - the "Diamond Self", on February 12, 1971 - becoming the Ascended Lady Master Lotus Ray King.