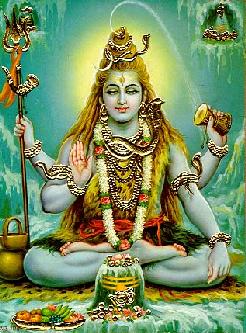 "Let Light penetrate to the Center of the Flame. Let Light as the Action of the Sacred Fire now imbue the soul with Shiva! I AM come. You have called. Now let us discover what oneness with Shiva can mean for the Victory.

"By the Lightning of Love from out the Great Central Sun, this is the age of the Holy Spirit and I AM Shiva! Now let the company of Devas, let the company of Angels come forth. So the Lords of Flame have sent the Flaming Ones for the age of the discovery of the Self in Love. By the action of Love that you have called forth, I AM determined to place within the earth Rods of the Energy of the Sacred Fire whereby those fallen ones who have come out of the pit to desecrate life shall be bound.

"Beloved ones, the earth is rampant with unclean spirits that hover and that move. Beloved ones, these fallen ones have invaded the very temples of the Lightbearers through the misuse of energy and rhythm. You have been told again and again and yet I say it again: that which has perverted life has come through the misuse of rhythm of the White-Fire Core. It steals into the subconscious mind by the abuse of the body.

"The presence of sugar, alcohol, nicotine, drugs of every description and kind within the temple are a weakening of the very fibers of the spiritual body whereby that body can contain Light  all of this aggravated by the rhythm of that rock music and the acid rock that is projected upon the youth. And, beloved ones, the very serious consideration of the Representatives of the Holy Spirit this day is whether or not this generation shall be lost because of the rebellion against Love in the misuse of the rhythm in that perverted sound which is invading almost every household where there are young people, and it occurs in youth because of the very energies of the Sacred Fire. These very energies, then, are those that are desired by the fallen ones.

"The invasion of the temple, the invasion of the Holy of Holies by these unclean spirits through the perversion of sound was the cause of the sinking of Lemuria and Atlantis. I tell you truly, this rhythm is not to be trifled with. It is one thing for the perversion to be in the outer courts of mundane life. But when those who are Keepers of the Flame  upon whose altars We depend for the cleansing of the planetallow the undisciplined energies of their children to be used in this misuse of the Sacred Fire, for their failure to control, by the Holy Spirit, their very own children, they therefore allow the desecration of the Flame.

"I sound the warning, then, that unless some have the courage to be in the world of form that fullness of Myself, you will find that for want of the discipline of Love and of the Sacred Fire this civilization will complete the three that have been projected by the fallen ones. You have heard that accidents come in threes; this is because the fallen ones misuse the Science of the Trinity. Lemuria, the first. Atlantis, the second. Will this continent, then, and this civilization be the third? Beloved ones, all is not secure until the majority of Light is in the Victory.

"Great strides have been won and the children of the Light have to be commended; for without your dynamic decrees, without your attunement with these very bhajans, there would have been far greater cataclysm in the North American continent during this winter cycle. We see, then, inroads of Light penetrating the deepest levels of the astral plane. We see that penetration of the mental belt. And yet, as the release of Rays of Light, unless there is sufficient thrust and momentum by the fiery Flame of Purity, the resistance to that Light, as friction on the highway, causes the penetration to ultimately come to its farthest reach. And thus We need a greater penetration of the Alpha Current, of the Masculine Ray, of souls raised up in the understanding of the carrying of that Light. We need mothers who are in the Flame of Mother who carry and are the guardian spirits of children. Blessed ones, the temple must be secure.

"Let the teaching, then, concerning the misuse of music be spread abroad. Let the appreciation of the great works of those classic composers who were sent by the Lords of Karma to manifest the inner pattern of the Music of the Inner Spheres be taught to the children, be taught to the adults. Let them be saturated with the Inner Harmony of the soul and thereby have the discriminating faculty of the Christ Mind. Beloved ones, the Lords of Karma anticipated the age when the fallen ones would emerge by the voodoo rhythm from the very pit of the astral plane. And therefore, centuries upon centuries before this hour of crisis upon Terra when mankind would be destined to meet the dweller on the threshold, the Lords of Karma have sent forth the great composers to show the people of Light what is the proper mode and rhythm and expression of Harmony.

"Beloved ones, in Golden Age societies  in the etheric culture  those who give forth music are required to have a certain attainment on the Path of Self-Mastery. They are required to be under a guru and to have balanced the energy of Love. Those who give forth the music in these cultures and civilizations, which I tell you exist on many planets and systems of worlds, are honored for their level of attainment. And it is absolutely not permitted that those who engage in astral or psychic activities be allowed to put forth the sound, the energy of rhythm, or a voice on behalf of the people. Those who sing and those who play musical instruments become the Harmony of an entire planetary body. Upon their chakras and within their temples, the Cosmic Chords of the Elohim vibrate. And it is understood that sound as a wavelength, as an energy, penetrates the sphere, the habitation, the planet, even if it is not heard by its inhabitants.