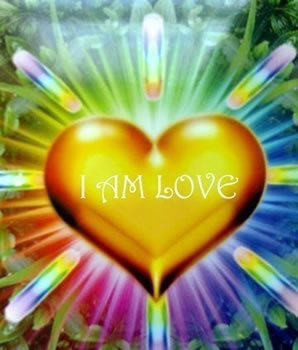 " . . . As you use the Violet Consuming Flame, It causes the Presence to set It into action and keeps It sustained when your mind is on something else. The Violet Consuming Flame acts. You do have to set aside a few monments several times a day, while you are accepting Its Activity. Call the Presence to sustain Its Activity and keep It going on all the time, until every particle of your discordant accumulation of the centuries is dissolved and consumed.

"In this way, dear hearts, you can so quickly free yourselves. I plead with you, precious ones, call your Mighty I AM Presence into action to do this with Great Power and Speed that you may be free. Dear ones, you can accomplish anything that your hearts desire for your Freedom, in this acknowledgement of the Presence. Do not let anything cause you to feel otherwise.

"Now, remember, precious ones, you must stand guard over your world! With the use of the Violet Consuming Flame, and the Tube of Light, which you have learned to draw forth into action, you make yourselves invincible to the further discord of the outer world. Thus, as the Violet Consuming Flame consumes all that has been drawn into your world, you stand free! Then, when you call your Mighty I AM Presence into action, Its Power can release with perhaps twenty, thirty or forty times more speed than It does before you use the Violet Consuming Flame enough, to dissolve the human accumulation which has been drawn about you. You do not know in the outer what is there, and it is not necessary to know. Fortunately for you , you do not; but when you call the Presence into action to consume your human accumulation, it is done completely. Then you will never have to look upon it. . . . "

". . . Beloved ones, fear is a strange force, We shall say. We have often said if people had as much faith in God as they have fear in human appearances, this planet Earth would have been self-luminous centuries ago. Fear is a feeling and it multiplies anything that your attention is upon while you have that fearful consciousness around you. Faith in God is a feeling and that multiplies any good thing that you have your attention upon. It is to be regretted that the mass entities which lie within the etheric consciousness of the peoples on the Earth so quickly tie into any type of a calamity, not only when it is in action but when it is even in a causative state when the outer mind becomes cognizant of the activity.

"Let Us Who are endeavoring to work with the Spiritual Hierarchy and the Great White Brotherhood use the faith in God instead of human appearances on every day living. Check yourself time and again upon this quality; feel no self-condemnation or self-depreciation, but if fear is acting, beloved ones, through the power of transmutation that fear can become a tremendous faith in good. It is just a case of changing the quality of that energy!

"We are thinking too about the fear in the minds of the people about being overrun by men from "outer space." The beloved Lord Maha Chohan brought to Our attention the fact that that fear, which is in the minds of men and increased by some science fictionists from time to time, is embedded from the happy time when individuals lived on Earth before the laggards came and then they experienced the coming of those impure souls into the atmosphere, into the physical bodies and the subsequent pollution of the Earth by their effluvia. That memory goes back so far so that when a prominent gentleman presented a radio broadcast of invasion by the Martians, there was a panic because the fear stirred the memories of the time when individuals in their inner bodies saw cargoes of souls that were drawn in by the Cosmic Law and then taken through the natural gates of birth into the planetary scheme of the Earth. That was truly an invasion that could make a mark and has made a mark on every unascended being who was upon this Earth before this happened and who has lived upon It since. Be assured, beloved ones, that those souls who came - great, great numbers of them - having been discarded by their own Stars, were accepted by the Cosmic Law after the Earth offered the hospitality of this orb to them. They did not come in without the free will invitation from the Hierarchy and the peoples of Earth and the Great Ones Who watch over it and there has been no such invasion since.

"The Cosmic Law now engaged upon the redemption of the Earth certainly would not burden Her by any further individuals or lives that do not belong to the Earth's evolution Itself, so do not be unduly disturbed by the presentations of possible invasions from outer space for destructive purposes. And the 'invasion' which We bring to your consciousness is an invasion of Love which does not require a great mechanical instrument; it just requires My thought turning to you and My Love flowing to you; your thought turning to Me and your love flowing to Me. It is so simple, yet man conceives the necessity of tremendous mechanical instruments in their minds and eventually they will endeavor to do it physically here on Earth, to convey the love from the peoples of Venus to the peoples of Earth. The peoples of Venus are no further from the peoples of Earth than your heart's cry, your prayers, your love! Space ceases to exist between any planet, any Solar System, when love reaches up, touches the consciousness of an Intelligence to Whom it is directed, and love returns. It does not take countless millions of light years, beloved ones, believe Me, for a word from the Earth to get to the Sun or the Sun behind the Sun!

"It takes JUST A MOMENT, the NOW, when you say - "Beloved Venus and Your people, I love You." While you are yet saying it, your love billows in clouds of Pink Flame around the Personage of Our lovely, stately Lady, around the great estates of the peoples of Venus, around the Priests and the Priestesses, and on the very same breath comes back a benediction of Love to you - not requiring great millions of light years to reach you but in THE NOW! Let us forget to measure space and time so far as the connection between Divinity and unascended beings is concerned, and know that the moment you think on and love any Perfected Being, you are with Them, and that very moment Their Virtue and Love flows back to and through you.

"So no need to strain for far distant Stars - We are as close as your heart beat!