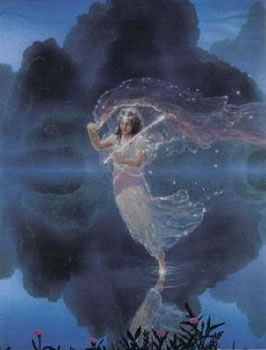 We honor Mary Lehane Innocente, a Student of the Great Brotherhood of Light in The Bridge to Freedom Activity during the 1950's, Who has Ascended and become One with Her Beloved Mighty I AM Presence. She was of Irish descent and had been married to the man who in a previous embodiment had been Simon the Cyrenean (the individual who was enlisted to help Jesus carry His cross).

Gustav Dore's portrayal of the Dante in Heaven

"I AM THE RESURRECTION AND THE LIFE"


Many people, serving in the orthodox circles of Christianity today, are abandoning the theory of the "vicarious atonement" in the sacrifice of the Master Jesus, as being not logical in its meaning. They are beginning to perceive the fact that His mission lay in the interpretation of the Cosmic Law as being that of Love and the attainment of the Kingdom of Heaven through its observance.

Nicodemus, one of the great teachers of the Jewish Law, hearing Jesus preach to the people in the temple, came to Him at night, under cover of the darkness, and requested Him to interpret the Law to him. He addressed Master Jesus as "Rabbi," which means "Master" and further acknowledged His superiority by saying, "We know thou art a teacher come from God." Master Jesus then proceeded to explain the Law. He said, "Except a man be born again, he cannot see (understand) the Kingdom of God." Nicodemus (who represents the intellectual consciousness) did not comprehend His meaning, and Master Jesus explained that it is difficult for the human consciousness to understand the Higher Spiritual Truths. Then He told them further, "Except a man be born of water and the spirit, he cannot enter (experience) the Kingdom of God - (because) that which is born of the flesh is flesh and that which is born of spirit is spirit."

He meant, by this, that the human parents' contribution to this offspring is the flesh body, in which dwells the human consciousness, including all the inherent characteristics of family, nation and race. But the Life that animates the body is contributed by the Father-God and contains, within Itself, both the Nature and Attributes of the Holy Spirit.

This Life Principle is the "Permanent Atom." Its form is that of a tiny Flame, or Spark, hidden within the heart. It is the Immortal Part of man and endures from generation to generation, through countless incarnate lives, as the personality takes role after role in its long evolutionary journey through the universe. Witness the statement, "Before Abraham (man) was, I AM (Life)"

The keynote of all of Jesus' teachings is that man is fundamentally a Spiritual Being, an integral part of God's Life, who volunteered, long ages ago, to enter the world of form, in order to individually experience the Law governing existence and so become co-creator with his Father-God.

The episode known as "the fall of man" was occasioned by these sons of God throwing off the Guiding Hand of Authority and deciding to experiment with creation on their own. This was the first violation of the Law of the One (because there is only One Life and One Intelligence), and when these God-Beings decided to set up a counter-intelligence, that moment was the lower or human nature born and, man's troubles began.

To turn the people back to their Divine Origin, great Beings like the Master Jesus and others volunteered to come, periodically, to take on the semblance of this lower nature in order that they might reach the human mind. Almost invariably, however, the ignorant and arrogant human element, not only rejected the teaching of the Avatar, but imposed violent deaths on their benefactors.

John, the precursor of Jesus, taught the Law of Purification through baptism by water, and all through the Christian Era, people have been baptized, by which ceremony people believe that their "original sin" of disobedience has been eradicated from the soul. However, the transmutation and purification of the lower self has been a slow process and was accomplished, in most cases, at the cost of tremendous personal effort. Therefore, the attainment of man's liberation from the wheel of birth and death has been a long, drawn out affair, and the Ascensions to the Higher Spheres have been few and far between.