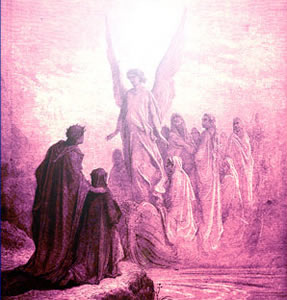 God has always had Messengers. The following examples are just a few.

Upon gaining Their Immortal Freedom in the Victory of the Ascension in the Light, Guy and Edna Ballard became known as the Ascended Master Godfre and the Ascended Lady Master Lotus. They were the Messengers who founded the The I AM Activity in the early 1930's under Saint Germain's direction. They served as His Messengers, delivering 3,834 dictations from the Ascended Masters throughout the United States from 1932 through 1970. In the fifteenth century, Lotus was embodied as Joan of Arc, God's Messenger who delivered the directions of Archangel Michael to the French army and thereby saved France.


After His Ascension, Mark Prophet became known as the Ascended Master Lanello. Mark was called by El Morya in 1958 to found The Summit Lighthouse and to set forth the Teachings of the Ascended Masters for the Aquarian Age. Mark was also a Messenger in prior embodiments. As the prophet Noah, He received the prophecy of the Flood and exhorted the people for over a hundred years. As the Egyptian pharaoh Ikhnaton, Messenger of Aton (the God of the Sun), he introduced monotheism.


Founding Christian Science in the late 1800's, Mary Baker Eddy was tutored by Jesus, Mother Mary and the Apostle Paul. Now the Ascended Lady Master Theosophia, she holds the office of the Goddess of Wisdom.


The Apostle Paul is now the Ascended Master Hilarion. During his embodiment as Paul, he had been an Initiate in the Greek Mystery Schools. Such statements in the Epistles of Paul such as "Let Christ be formed in you" are the product of an Illumined Mind. (Unfortunately there were later insertions into the Epistles of another literary style of writing which speak of the human sacrifice of Jesus on the cross being necessary for the salvation of men.)


John the Beloved, "the disciple whom Jesus loved," received the dictation of the Book of Revelation from Jesus.


Saint Teresa of Avila, sixteenth-century reformer of the Carmelite order in Spain, often communed with Jesus. He once told her, "Don't neglect to write down what I say . . . I shall give you a living book." She is now the Ascended Lady Master Kristine.


Jesus Christ was Himself a Messenger. In His Galilean embodiment, He delivered the words of Lord Maitreya, whom He referred to as "Father." He had previously served as a Messenger in His embodiments as the prophet Joshua and the prophet Elisha. As Elisha, He received the Mantle of the prophet Elijah.


The prophet Elijah Ascended to God in a "chariot of fire". Malachi prophesied that Elijah would return to Earth to go before the Messiah. Jesus described John the Baptist as having been the return of Elijah. Thus, as both Elijah and John the Baptist, He served as God's Messenger.


The prophet Samuel was the last of the Judges of Israel. He received His calling as a Messenger when He was a child. Through Samuel, God anointed David as king of Israel. Samuel is now the Ascended Master Saint Germain.


The prophet Moses was the Messenger of the "I AM THAT I AM". He was called to deliver the Israelites out of bondage in Egypt. The Book of Exodus records: "The LORD spake unto Moses Face to face, as a man speaketh unto his friend." He is now the Ascended Master Lord Ling.


The coming of Moses was prophesied 13,000 years ago by Ernon, Rai of Suern, a Messenger of God at the time of Atlantis. His subjects, the Suernis, rebelled against His discipline, and Ernon warned that they would have to wait some 90 centuries for their next Messenger, "him who shall be called Moses." The Suernis reincarnated as the Israelites, among the seed of Abraham.


The patriarch Abraham, "father of many nations," was called the "Friend of God." The LORD God called Abraham out of Ur of the Chaldees and promised Him "I will make of thee a great nation." Abraham is now the Ascended Master El Morya.


Abraham tithed to Melchizedek, who was king of Salem and priest of the Most High God. Melchizedek was the Messenger of God described in Hebrews as being "without father, without mother, without descent, having neither beginning of days nor end of life but made like unto the Son of God." He is now the Ascended Master Maitreya


The patriarch Enoch, who "walked with God," was the Messenger of Sanat Kumara, the Ancient of Days, spoken of in the Book of Daniel. In the Book of Enoch, Enoch records the revelations given to him while he was in his finer body.


Gautama Buddha, another Messenger of Sanat Kumara, founded Buddhism in the sixth century B.C. For 45 years, He preached throughout India, spreading his doctrine of the Four Noble Truths, the Eightfold Path and the Middle Way.


Hermes Trismegistus, ancient Egyptian sage, was called the "scribe of the gods." He is now the God Mercury, whom Ascended Master El Morya has called "the Archetype of the Messenger of the Gods."

Note:    The term "Great White Brotherhood" refers not to race but to the Aura of White Light that surrounds These Immortals, Who have risen from every race and walk of life. The Ascended Masters currently prefer to use the name "Brotherhood of Light"