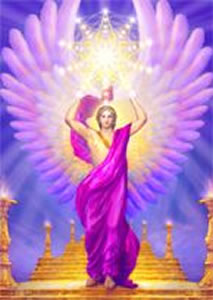 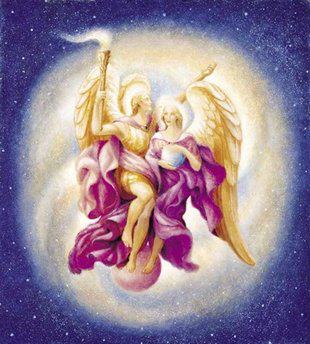 " . . . The Garden of Eden was created by the Lord God as a Haven of Light and Loveliness, as a replica of the Causal Body for the early root races who did not depart from the perfection of the Plan. In the center of the garden was the Tree of Life, focus of the I AM Presence made tangible in Mater. And the Tree of the Knowledge of Good and Evil was the Presence of the Christ, the blessed Mediator in whose Consciousness is the balance of understanding of the absolute perfection of God and the relative imperfection of man and woman. 'And the Lord God commanded the man, saying, Of every tree of the garden thou mayest freely eat: but of the Tree of the Knowledge of Good and Evil, thou shalt not eat of it: for in the day that thou eatest thereof thou shalt surely die.'

"Eve's hearkening unto the serpent who said, 'Ye shall not surely die' was the first compromise of the Flame of the Christ on Terra. And so it came to pass that the generations of the fourth root race who lived in the abundance of the Motherland did partake of the energies of the Christ and of the fruit of the vine before they were initiated by Almighty God to be partakers of the Holy Communion. Later, the one who said, 'I AM the vine, ye are the branches; except ye eat the flesh of the Son of man and drink his blood, ye have no life in you' would come to initiate mankind in the sacred energies of the Word and of the Logos. He would come to initiate the ritual whereby man and woman consecrated in Christ might partake of the Eucharist.

"The penalties for seizing the fruit of the vine before it is offered in grace from the hand of God are grave indeed. The expulsion from paradise was the sealing of the Causal Body from the access of fallen man and fallen woman. Their rebellion was against the Law of the Christ. Thus by wrong choice, engineered in the cunning of the serpentine mind, they cut themselves off from the Lord's table and from the abundant gifts and graces that are the Gnosis of the Tree of Knowledge. And lest their rebellion and their arrogance should cause them to put forth their hand and take also of the Tree of Life, partaking of the energies of the I AM THAT 1 AM and investing these in the creations of the wicked, the Lord God drove man and woman from the garden of paradise.

"To guard the Consciousness of the 'I AM THAT I AM', He placed at the east of the garden 'Cherubim and a Flaming Sword which turned every way to keep the way of the Tree of Life.' The east is the side of the Christ Consciousness and the sword is the sacred Word of living truth that proceeds out of the mouth of the Faithful and True. It is the sword which turns every way in the quadrants of Mater to protect the soul's outpicturization of the Threefold Flame of the Christed One. And the Cherubim are the Guardian Consciousness of Almighty God who protect that Flame in man and woman, in Heaven and Earth, in the Holy of Holies and in the coordinates of time and space.

"I stand before the living Presence of the Law in each and every soul who, upon reading my words, does utter the vow of allegiance to the Tree of Life, the I AM Presence. And I read the proclamation that comes from the Hand of Alpha and Omega this day. It is a proclamation of opportunity in grace for your soul to return to paradise lost, to the garden of the Causal Body, to the place where the Consciousness of the Christ implants the Knowledge of the Tree of the Knowledge of Good and Evil.

"For every soul who reads these Words who has entertained the consciousness of the Fall, I bring opportunity for the ascent to the throne of grace. The path of your journey to the end of the cycles of personal and planetary karma has been calculated for you and for every soul who has gone forth from the center of the sun to the periphery of the created spheres in Matter. To each and every one who does with allegiance run, the formula and the forcefield of Light are given into the hand of your own beloved Christ Self.

"Therefore, go not a whoring after other 'gods' and other 'Christs' and spirit guides with their fantasies and their filth of psychic phenomena. But let every man and woman sit under his own vine and fig tree, under his own Christ Self and I AM Presence, even as Jonah sat in the shadow of the gourd which the Lord God prepared to deliver him from his grief and the groaning of his soul struggling in the way of surrender. Are you in that way this day? Are you, with Saul, the unredeemed, kicking against the pricks of the Christ? Behold, your redemption draweth nigh! Behold, your Redeemer liveth! . . . "