Angel Who Rolled Away the Stone

"Yes! I AM the Angel Who Rolled Away the Stone!

"Would you have Me roll back your stones of stumbling, your boulders of pride, your mountains of fear and doubt?

"If the answer is yes, then call to Me! For I AM the roller of the stones that prevent the children of the Light and the sons and daughters of God from going straight to the mark of Sirius, to the Great Central Sun and to the Sun of Helios and Vesta.

"Think now, as I speak to you, where have you erected boulders that you can no longer roll away because they have become so great? Is it not so, that an Angel must rescue even the Lord by rolling the stone away? This is the meaning of the incomparable service of the Angelic Hosts of Light. We move - indeed, We move, as it is Our assignment - to care for the sons and daughters of God who are undergoing the Initiations of the Passion of our Lord.

The Angel Who Rolled Away the Stone from the tomb at Jesus' Resurrection was the Archangel Gabriel. He spoke to humanity through the Messenger, Elizabeth Clare Prophet, on Friday, March 28, 1997 during the Easter Retreat. Preceding this discourse, the Messenger read an excerpt from The Prince of the House of David. 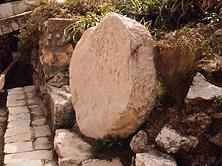