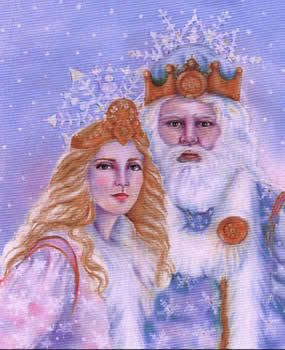 The Snow Queen is a Cosmic Being with a great Magical Miracle Light and Consciousness of Purity. Beloved Snow Queen and Snow King held the balance for a Golden Age Civilization on the Earth hundreds of thousands of years ago. They did this by focusing the Purity of the Light of the God Presence for the people embodied at that time. Along with Her Divine Complement, the beloved Snow King, She has served the inhabitants of another System of Worlds for quite some time, and periodically came back to our Earth for short periods. She and beloved Snow King had tried to see whether sufficient appreciation for Divine Purity has been reached by enough of the people.

Beloved Snow Queen announced in Her Dictation on January 11, 2004 that Both of Them will be now be engaged in a greater Service to Earth, where it is time for Them to be more present. They have now offered to assist us in bringing in a new Golden Age! Hold fast to the Light of Purity in mind, Heart and body, and call upon these Beings of Purity to cleanse your consciousness so you may receive entree into Higher Realms! (1) 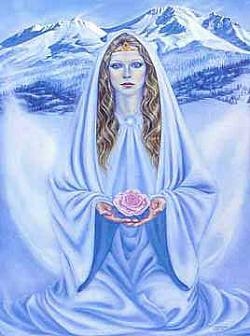 " . . .  It is the desire of the Ascended and Cosmic Beings of the Angelic Kingdom, of the Elohim to assist you in fulfilling your fiery destiny. To do this requires the Fire of the Light of your own God Presence. The more steadfast you are in pursuit of your destiny the more opportunity is extended to you to expand that destiny. Perhaps you have thought that there is one single desire that your God Presence has for your lifestream to fulfill? But your God Presence does not ask too much of you, is always considerate not to push you beyond the limits of what these outer vehicles are able to accomplish and yet when the Presence discovers that you have indeed stood the test, you have passed the initiations, you have absorbed the Light and you have held that Light and continued to march forward on your path straightway into the heart of your own Holy Christ Self, then the Presence is able to reevaluate which the Lords of Karma the expansion of opportunity for your lifestream.

You know not the limit of what can be accomplished but each good work, each emanation of Light and purity that streams forth from your lifestream on every plane of consciousness marks certain attainment that weighs in the balance scale of not only what you are able to accomplish for your lifestream but what you are able to do for God in life for all mankind. And is this not the compassionate Heart of God? Is this not the desire of your own God Presence to amplify, multiply and expand the fullness of God where you are?

When the Light of your God Presence registers with the Light of a Cosmic Being and you as this outer vehicle and extension of the oneness of your own God Presence are able to hold to that Light, to that energy that is pure and stand within the onrush of that White Fire radiance, think of the Blessing that the many can bring to God in life. God in the little child. God in those who have infirmities. God in those making their transition. God in those entering into a new incarnation. God into the Earth, into the elemental forces of nature lifting the burden of condemnation and negativity so that there can be a greater freedom of expression of God to serve the Sons and Daughters of God, for this is indeed why the elemental kingdom has come. Greater receptivity to the holy Angels who serve on all of the Rays of God Qualities ready to dip into the atmosphere about you, change, alter, charge with their Light so that you might be safeguarded and protected, so that your pathway may be cleared of any obstruction to your safety and your ascent. All this because you have elected to make yourself ready, to stand in the Holy of Holies of the Purity of your Being and with the fingers of the Mind of God search the Face of God in all of the varied dimensions that allow you to weave the garment of Light that you will wear even now while in the physical octave.  . . . "

" . . . And may I introduce the Twin Flames, the mighty Snow King and the Snow Queen, whose Light has graced in ancient time the land known as Greenland, beloved ones. And thus they ruled there in an era when all was tropical and beautiful, and therefore the name remained.

Beloved hearts, dwelling in the White Fire Core of the holy purpose of this ancient civilization, these Twin Flames release in this hour the Light of a Cosmic Snow which comes upon earth as a Cloud of Infinite Energy such as you call forth according to the Alchemy and Ritual of Saint Germain.

"Therefore, beloved, know that this Light of Cosmic Snow has the same absorptive quality of the Cloud of Infinite Energy. It comes to earth, then, in a release of Light, clearing the debris for the descent further and further into the physical octave of the etheric body of Light, the swaddling garment given to Earth thirteen months ago.

"Blessed ones, this Cosmic Snow is to absorb ten thousand times the weight of each particle in human creation and substance of the astral plane. Such is the quality of this Light."

" . . . And thus, you see how the brothers of our band are very short on prophecy in either direction, but choose rather to warn of the possibility of consequences if individuals do persist in the path of unreality, in multiplying maya, or in whiling away the hours when they could be forging a new civilization and castles of Light for the descent, perhaps, of the Snow King and Queen.

"For these Twin Flames once ruled an ancient civilization, tropical in nature, that was where Greenland is today and covered a good part of the North Pole. Blessed ones, when the ages changed and the inversions took place, thus they were remembered for the end of Their period as the Snow King and the Snow Queen.

"Thus you understand how the White-Fire Light may also descend, and that which was once green and lush and beautiful as a Garden of Eden, even as a Lemurian Paradise, might be covered over with a White-Fire/blue-fire energy of the sun. And thus, the age of snow comes as a purification of the etheric plane, purifying even the physical body and preparing once again for a new order.

"Thus, all things in their cycles have a cosmic purpose. And that which was once snow may blossom again and become the pink and the gold and the violet hues and the azure blue and the light of many worlds twinkling, sparkling in tropical waters that show all manner of opportunity of life-forms moving toward the sun."