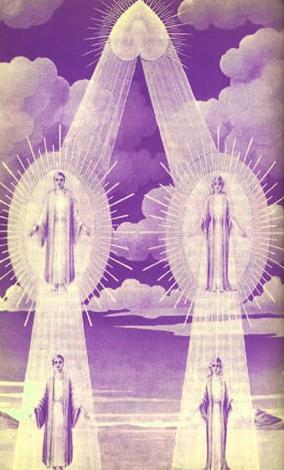 With the first stage of Creation thus being completed, the next step was the creation of "garments" for the "Spirit Sparks" (God Flame Individualities of the "I AM") [*] which, as we have seen, having been drawn from the Universal.

Just as an individual needs and uses "garments" for the proper function and well being of his physical form, so do the "Spirit Sparks" (God Flame Individualities of the "I AM") [*] after leaving the Higher Realms.

For the acquisition of these they projected into Universal Light becoming the Glorious Immortal Three-fold Flame, with a Great White Body around it. This was the original Individualized man who stood before God - the Great "I AM" in form of Perfection. [*]

In the following, we give excerpts, taken from Addresses given by no less Authentic Authorities on the subject than God Meru - Manu of the Sixth Root Race, Chohan Saint Gemain, Lord Maitreya - the present Buddha, and Chohan El Morya. Each One of Them treats the subject from a different angle.

". . . These 'Spirit Sparks' (Great God Flame Individualities of the "I AM") [*] project into Universal Light two glorious Immortal Three-fold Flames. Around These there is formed a great White Fire Body (Electronic Body) [*] for the Two Divine Complements - male and female - all still in the Realm of Perfection. These two Divine Complements, (Twin Flames.) [*] as They dwell in that Realm of Perfection, have free will and they can choose to descend through the entire Seven Spheres (Seven Realms of Nirvana / Akasha / Causal Body / Atmic) [*] where Perfection exists, lingering as long as they desire, in each of the Spheres, and assimilate as much of the instruction as they desire.

You may think it peculiar, but the Two Divine Complements do not always proceed together through the Seven Spheres, because through free will, one sometimes will remain a little longer in the first Sphere and, perhaps, the other move on to the Third. It is exactly the same as when one of the Two Divine Complements chooses to take embodiments." (A)

In the following, Saint Germain is giving us another facet of this interesting but little known subject.


". . . It must be borne in mind, that man Individualized, originally stood before God as a White Fire Body, having the form of a perfect Circle of Light.

With the projection of the White Fire form into Twain, each of the two projections of this White Fire Body manifested as an individualized I AM Presence in the Heart of the Great Central Sun. It should be understood that the twain, who descended from the White Fire body originally, composed of the whole Circle, are Twin Rays, one part of the complement (primarily) [*] manifesting the Masculine nature of Deity, the other the Feminine.

At times, one of these elected to remain in the Higher Octaves without descending through the dense spheres, and then, in many cases, both descended to participate in the realm of experience, moving through the octave of consciousness into the present hour. The descent of the Christ is scriptually referred to in the phrase "Lo! I come to do Thy Will, O God!" (Hebrews 10:7-9) Thus the Immortal Power of Life, descending from the Godhead as Man, the Individualized Monad is possessed with the Holy Intent of fulfilling the Divine purpose through the Ritual of the Ascension. . . "

Continuing Lord Maitreya, the Buddha, presents it from a different perspective.


". . . When you and each one of mankind first stepped forth from the Universal Presence, you had an awareness and a realization of Identity. You felt and thought 'I AM'. You found yourselves as Beings, Self-Conscious Beings, and in every fiber and cell of your Presence, you realized 'I AM Being'. (B)

"As you served in that innocence, sharing the Consciousness of the Allness of God, you knew the Primal Life was yours to use as you chose. You were the Holy Innocents and Primal Life, exquisite, iridescent, flowing into the Immortal Threefold Flame in your Heart became the possession of your Selfhood. In this innocence you abode, and out of Primal Life you began to create according to that which you saw around you. You lived in a Realm close to the bosom of the Eternal, where there were no forms that were not Exquisite. All was Shining Magnificence. This consciousness of thought began to picture what it saw and you began to create like that which was around you - timidly at first, little tiny cherubic forms, small Temples. Your feeling, enjoying the Individualization and Power of Creation, filling those tiny forms, They began to flow out from you into your aura and into the Sphere in which you dwelt. You experienced the Joy of individual creation, choosing through free will what you would design out of this Intelligent Light Substance. . . . " (C)


" . . . When the God-Parents took the responsibility for evolving a race upon the planets of our system and had "drawn forth" (invited) [*] the billions of "Spirit Sparks" (Great God Flame Individualities of the "I AM") [*] from the Great Central Sun of our System, They gave to you and each one, bodies, molding each Divine Archetype from the White Fire Beings and then the Electronic Presence, (D) like unto Their Own Image and likeness and each such beautiful Presence was the 'Only Begotten Son'!

"Some of these Divine Presences "divided" (projected) [*] and became two Perfect I AM Presences and then sent out a portion of Themselves into the world of form in order to expand their own Divine nature and widen the borders of the Father's Kingdom. The personalities which form the inhabitants of the Earth today, encase the projected Selves of these Divine I AM Presences - the Holy Christ Selves - the personalities have, unfortunately, forgotten their God Purpose and God Identity. (E)

"The purpose of the creation, as well as the sustenance of any system of worlds, is to allow each I AM Presence Who stepped forth from the Universal Heart of God to unfold a Spiritual Nature and become Master of energy and vibration through the conscience of control and use of his own creative faculties of thoughts and feeling.


A "For every Individualized I AM Presence, which accepted the responsibility of passing through the Seven Spheres and, eventually, descend into the world of form, there were at least one dozen or more who preferred to return to the Universal which was pleasant, rather than assume the responsibility involved in the Individualization (into the Five Realms of 'Coming to Be' - Akasha, Buddhic, mental, emotional, and physical)." [*] (Archangel Zadkiel)

On the other hand, others, using their free will, decided not to project two I AM Presence (Electronic Bodies), [*] and preferred to remain One, going through the Seven Spheres single.

B The Great Divine Director, in an address given to the students some years back, referring to the words "I AM" said that these words are not of recent human invention, as some may think, but have come down to present time from the beginning of man's coming to Earth. Proof of that, He said, is found in the archives of the Royal Teton where the records of all past civilizations have been kept, exactly as they were originally written in their respective language, and the words "I AM" are found there as they are in use today. He added that these two words are the Power of God.

Elsewhere in these pages, we give an address given by the Solar Logos of our Galaxy - Alpha and Omega. From that address, apropos to the above and the words "I AM" I quote the following:

" . . . As We have declared, within your hearts and your minds will We write Our Law! The Law of God - The Law of Adoration is reflected in the words " I AM," for "I" Alpha, the ONE Who signifies the Source - the numeral 1, and the word I. Omega, My Beloved, represents the "AM" and is therefore called A-may-ga. I - Amega - the Beginning and the Ending. . . "

C " . . . As you have been told, each one's Presence dwells in a Sphere of Activity determined by the amount of Light that It draws forth and dispenses. The demand is the motivating power behind the supply; so if the four outer vehicles (representing the outer consciousness) have so engaged themselves through the centuries, that, through prayer, good works and invocation, they have demanded the release of Light from the Presence to sustain their endeavors, then this Light has grown in intensity by reason of the demand of the outer self. . . " (The Maha Chohan, "Bulletin" September 7, 1958)

Elsewhere, in another of His comments, ("Bulletin" vol. 7, 36) The Maha Chohan says

Continuing on the same subject, elsewhere He states: ("Bulletin" December 14, 1958)

" . . . The most evolved the personal self, the higher is that one's I AM Presence in the Octave of Perfection, and by reason thereof, does it draw more of the substance of the higher Levels, through the Electronic Light into the Holy Christ Self within the human Heart. . . "

D " . . . When We speak of Life, We speak of what the scientific world calls Electronic Energy. I AM a Cosmic Dispenser of Life, and therefore know the actual reality of that Electronic Substance. Men consider life wasted, life boring, etc., because they do not understand the very nature of that glorious Gift of Life, from God's Heart.

E When the word "personality" is used by the Masters, it does not mean the "I AM Presence" but the "soul" as it was developed by man in his many re-embodiments and is manifested now in its totality as his "personality." For a better understanding of this, let's bear in mind that man in each and every re-embodiment, creates for himself a "personality" which is the result of all the experience of that particular life. The "soul" is the totality of the memories of all embodiments of the individual on this planet. This "soul" however, should not be confused with the I AM, which is man's Real Eternal Identity.


Tellis Papastavro was born in Greece and spent his formative years in the radiance of Beloved Pallas Athena's Temple of Truth. When he was 17 years old, he came to America where he spent his life seeking the answers to the questions "Who am I? Where did I come from?" Tellis found his answers in the information and teachings that were being released to Humanity, in an accelerated fashion, in accordance with Cosmic Edict. This information and teachings came from several key sources and was preparing Humanity to work in cooperation with the Ascended Host for the purpose of transforming the Planet into Her Divine Heritage, which is Heaven on Earth.

Realizing the necessity of a publication that would make these teachings available to every seeker - neophyte and experienced alike - Tellis compiled this information into "a handy manual of ordered teachings" and ""The Gnosis and the Law" was created. The material is considered the "Jewel Teachings" of the Spiritual Hierarchy.

Tellis was a selfless servant of the Light, and his sole purpose in publishing this sacred book of illumined Truth was to expand the wisdom and knowledge of God on Earth. Our Beloved Tellis returned to Greece in 1988 where he made his final preparation to leave the Earth. He was called home on February 3, 1989 at the age of ninety nine.