Retreat of the Elohim of the Second Ray 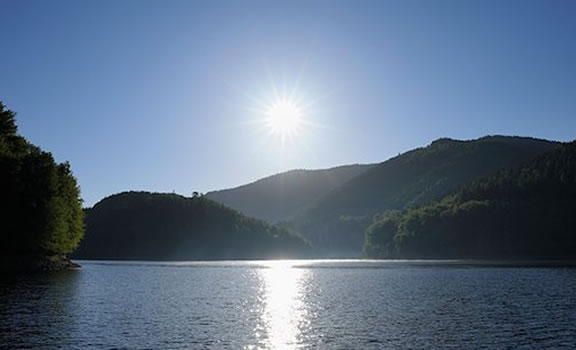 Apollo and Lumina are the Elohim of of the Yellow Ray of God's Wisdom and Divine Illumination. Their Retreat is located in the etheric plane over Lower Saxony, Germany. The Golden Yellow Flame in Their Retreat radiates immense waves of Gods Wisdom and Illumination to the entire Earth, functioning as a Sacred Energy Center — the Crown Chakra of the planet. In every Retreat of the Elohim, there is a Focus of the Sacred Fire that is maintained at all times.

On the outside of this Retreat are three pillars that form a triangle patten. These act as electrodes focusing a yellow star matrix at the top of each pillar. Apollo and Lumina's Retreat has three levels in the round dome of this etheric retreat, built in a parabolic curve. Each level has a meditation area with a capacity to accommodate one thousand Angels serving under Apollo and Lumina. The first floor is the largest, while the the second and third floors are progressively smaller.

Apollo and Lumina's Retreat also holds classrooms, laboratories, libraries and archives. These form a radial pattern outward from the center of the meditation room on each of the three floors. At the first level there is a circular hallway following the circumference of the building. On either side of the hall are three-dimensional exhibits showing the operation of the Law of Cycles of time and space and throughout the Earth. Also illustrated are the Cycles of Dispensations from Cosmic Beings and Their Releases of Light to the Earth, the cycles of civilizations, and the cycles of nature. These cycles are based on the Law of the Twelve illustrated in the Twelve Bands of the Causal Body, the Twelve Hierarchies of the Sun and the Twelve Pairs of Elohim serving the Earth (for the Seven Outer Rays and the Five Inner Rays). There are several thousand such displays atop square pillars that are approximately four feet high. The electronic forcefield within these square pedestals allows these displays to be suspended in the air and to be animated, with moving flames and energy spirals illustrating the infinite complexities of our planet and making them simple through illustrations. Students are invited to come here to quicken within themselves the Seven Aspects of the Mind of God and the Five Secret Ray Qualities of the Christ Mind, in order to help anchor a Golden Age upon the Earth through illumined and intelligent action.

In preparation for the coming Golden Age, tremendous tides of Illumination's Flame are being released from this Temple. The millions of Angels serving with Apollo and Lumina are ready to go forth to raise the consciousness of the entire Earth to the level of the Christ in answer to the calls of the students.