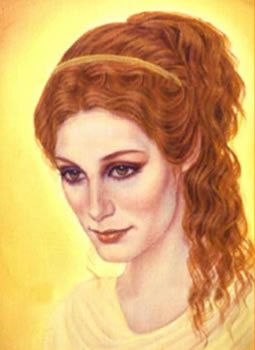 " . . . For there to be a Golden Age, the Teaching must go forth in its highest, purest Vibration. It must be carried upon wings of Courage, of Strength that knows itself to be the Will of God in manifestation and desires to reflect that Will of God by the Mind of God creating about them the form, the dimension, the Vibration and the acceleration of that which is the pure engram of the Light of God.

"The little ones must be taught from early on how to think, for absent thought correctly manifesting in one’s life, there is no forward motion into a higher opportunity and way of life. So oft times are there those caught in momentums of stagnation because of early training where they have been allowed to merely coast along at their own pace, supposedly. But it was not their own pace at all. But they are untaught and untutored and fell within the grasp of human consciousness and the momentum of the chaos of energy of a lesser consciousnesses. When a consciousness is accelerated, it opens to the fiery engrams of the Christ Consciousness. By Necessity, the training that is required for setting aside the human intellect and the human mind of God is tutored in the early schoolroom of holding the focus and attention upon detail.

"When this occurs, there is the opportunity for that one to begin the  process at the appointed hour according to the Mighty I AM Presence and Holy Christ Self of that one to be tutored by the Heart and for the Flame of Illumination, for the Love of God and the Will of God that resides upon the altar of the Heart, to leap with joy for there is a vehicle prepared that is not rigid, not resistant, not recalcitrant, but has opened their mind to the possibilities of a higher Truth than was printed upon the page of the schoolroom of Earth, that has accepted that the Heart of God in its benevolence and abundance would not leave them bereft of all that was required to make their way back home into the Heart of God.

"And they likewise knew that when they set aside those areas of consciousness of unreality long enough, with the single-eyed vision upon the Heart of God that the Will of God is imparted to their outer consciousness through the Heart. This is how, Blessed Ones, you go from being a mortal man or woman to becoming immortal in the Ascension. You establish the patterns of thought that are, yes, taught by the ability to communicate one vehicle of consciousness with another, with another, with another until there is an alignment of the charge of Light from your own God Presence holding in check the world’s vibration, holding in check all that would stand to oppose the Mind of God coming forward, and keeping you firmly fixed in time and space, yet with a consciousness upon the Divine.

"These momentums establish the patterns over which more and more Light, more and more teaching and instruction, more and more Illumination and the wise use of all that is imparted to you from our Octaves of Light are able to be understood, to be translated into your outer life and to be set as the example for others to follow. When you make the election to move within the realm of the Christ Consciousness, you will open the doorway of the Heart to receive more and more of this Light of the Second Ray of Illumination’s Flame from Elohim and you will be off and running. And you will not be running to some unknown point but you will be accelerating to your Ascension. You will be galvanizing into your world all that is required for you to not only balance your karma, fulfill your dharma, but to have the understanding in the very deep recesses of your consciousness what is the Divine Plan for your lifestream and how to carry it out.

"You cannot carry out a plan you do not know exists. You may, if you are fortunate, occasionally stumble on to some pathway the leads you to that Divine Plan, but it will not be by accident. Your Mighty I AM Presence has engaged much with the Holy Angels, the Master and your own Holy Christ Self to see you are in the right place at the right time, in the right vibration to, hopefully, catch a glimpse of the reality of who you are and hold onto it, not let go for one second and build upon to that glimpse until it is a vision of your own God Presence imparted within you that will not be denied.

"And this, Blessed Hearts, is what We, Elohim, have come to impart to the Earth, so that cycles upon cycles from the microcosm to the macrocosm will reflect one to the other the Perfection of the Mind of God and all that is required to bring God into manifestation. The fullness of the Radiance of our Consciousness streams forth as patterns of Light, spiraling arms of pinpoints of Light that will carry all that is required for you to have the reinforcement of the Flames of Elohim upon your brow to draw into your life the requirements deemed necessary by your own God Presence and by the Mind of God. When you settle for less, you discredit your own God Presence in this world of form.

"Be the fullness of all that is the dream, the vision and the goal of your God Presence for this incarnated life. Accomplish that which you perhaps only dreamed heretofore. For you have all that is required to do so. . . . "