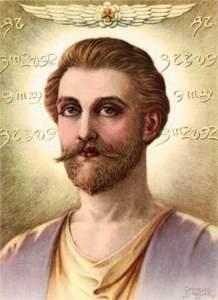 "When some of those individuals who study Life and the Laws of the Universe, more deeply than the mass of Earth’s children, become aware of the fact that there are Ascended Masters, they often desire to go to these Great Ones for instruction. While, in many instances, this is an unconscious upreaching of the soul within to the Greater Light, yet the personal self little realizes in what relation it stands to those Great Beings who are Wholly Divine.

"There is a way by which an intensely earnest and determined student may make contact with one of Them, but that can only be through the activity of enough Love and discipline of the personality. If the motive for such contact be for the gratification of curiosity, thinking to prove or disprove the Ascended Masters’ existence, to merely solve a problem, or to convince a doubt in the personality, it will never come about, rest assured of that for the Ascended Host are never concerned with satisfying the human side of any student. Their entire effort is with the expansion of the God Self within, so that Its Power may be released forcefully enough to snap the limitations in the human self, that do not give It a perfect vehicle for use in the mental, emotional, and physical worlds of manifestation. These are the realms of thought, feeling, and action.

"Human weaknesses and limitation simply impair the vehicle that should be trained and kept in the best possible condition, as an efficient servant, for the use of the Great Inner God Self. The human body with its faculties is God’s Temple of Energy, which the ‘Great God Presence’ provides and through this outer-self, It wishes to express a Perfect Divine Plan or Design. If the uncontrolled sense appetites and demands of the personality waste the God-Energy, so the ‘Inner Presence’ is not given command of the vehicle, It steadily withdraws, the human self loses the power to manipulate mind and body and the temple collapses into decrepitude and dissolution. We then have the condition the world calls death.

"The person, who seeks to contact an Ascended Master in the visible, tangible, living, breathing body, without the preparation needed to gradually attune his own outer structure and mind, is in the same position a child in kindergarten would be, were he to see a college professor and insist on learning the A. B. C.s under him.

"The Ascended Masters are really Great Batteries of tremendous Power and Energy, and whatever touches Their Radiance becomes highly charged with their ‘Light Essence,’ through the same activity that makes a needle kept in contact with a magnet take on its qualities, and become a magnet also. All Their help and Radiation is forever a free Gift of Love. This is the reason they never use any of their force to compel.

"The Law of Love, the Law of the Universe and the Law of the individual do not permit the Ascended Master to interfere with the free will of the individual, except at those periods of Cosmic Activity, in which the Cosmic Cycle supersedes that of the individual. It is during these times, the Ascended Master may give more than ordinary assistance. The Earth has entered such a Cycle now, and the greatest outpouring of the Light the Earth has ever known is being and will continue to be shed upon humanity, to purify it and re-establish the Order and Love that is imperative for the future maintenance of our planet and the system of worlds to which we belong. All that does not or will not come into the action of order, balance, and peace must of necessity pass into some other school-room of the universe, and work out its own understanding of this Law, in some other way than is to be the expression of the future Life upon our Earth.

"There is only one passport into the Presence of these Great Ones and that is enough Love poured out to one’s own God Self, and to Them, united with the determination to root out of the human all discord and selfishness. When an individual becomes determined enough to serve only the Constructive Plan of Life, he disciplines perfectly his human nature, no matter how unpleasant the task. Then, he will automatically draw to himself the attention of an Ascended Master, who will take note of his struggles and pour out courage, strength, and Love sustaining him, until he maintains the feeling of his permanent contact with the Inner God Self.

"The mass of mankind is exactly in this state of consciousness today and will continue in it, until they accept the God within their hearts as the Owner, Giver, and Doer of all the Good that has ever come into their lives and world. The personal self of every individual must acknowledge completely and unconditionally that the human or outer activity of consciousness has absolutely nothing of its own. Even the energy, by which one recognizes the Great God Within, is radiated into the personal self by the Great God Self.

"Love and praise of the Great Self Within and the attention maintained focused upon Truth, health, freedom, peace, supply, or any other thing that you may desire for right use, persistently held in your conscious thought and feeling, will bring them into your use and world, as surely as there is a Great Law of Magnetic Attraction in the Universe.

"The Eternal Law of Life is: ‘What you think and feel you bring into form; where your thought is there you are, for you are your consciousness; and what you meditate upon, you become.’ When one allows his mind to dwell upon thoughts of hate, condemnation, lust, envy, jealousy, criticism, fear, doubt, or suspicion, and allows these feelings of irritation to generate within him, he will certainly have discord, failure, and disaster in his mind, body and world. As long as he persists in allow-ing his attention to be held by such thoughts whether they be about nations, persons, places, conditions, or things he is absorbing those activities : the substance of his mind, his body, and his airs. In fact he is compelling — forcing — them into experience.

"All these discordant activities reach the individual and his world, through his thought and feeling. Feeling often flashes before one is aware of the thought in the outer consciousness, which he might use to control it, and this kind of experience should teach him how great is the energy within his many creations, which has accumulated through habit.

"The feeling activity of Life is the most unguarded point of human consciousness. It is the accumulative energy by which thoughts are propelled into the atomic substance, and thus thoughts become things. I tell you, the need of guarding the feeling cannot emphasized too strongly, for control of the emotions plays the most important part of anything in Life, in maintaining balance in the mind, health in the body, success and accomplishment in the affairs and world of the personal self of every individual. Thoughts can never become things, until they are clothed with feeling.

"The Ascended Master knows and sees all concerning the student for he reads clearly the record, which the student has made in his own aura. This re-veals the state of the disciple’s development — his strength as well as his weakness. The Ascended Master is the All-Knowing Mind and the All-Seeing Eye of God, for from him nothing can be hidden. The one who wishes to come into the visible, tangible Presence of the Ascended Host, should understand that unless he makes himself a Radiating Sun of Love, Light, and Perfection which the Master can expand, and use as a part of Himself, that he can direct to any place consciously at will, he would be useless, merely a barnacle and drain upon the Master’s Work and World.

"If the student has not, be not willing to, or does not discipline the personal self, so it is calm in mind, peaceful and loving in feeling and strong in body, he is not material that the Ascended Master can use in the more than human work that he does. When the student has not a strong, controlled, well developed vehicle, he is unable to co-operate with an Ascended Master, and thus do work of a kind which is beyond that of ordinary human experience.

"Were One of these Perfected Beings to take a student without such qualities into His Field of Work, he would be making the same mistake one does in building a machine or home if he constructs it of imperfect material. That kind of material naturally could not stand unusual strain, under sudden need, or prolonged service. Thus, it would not be the part of Wisdom, Love, or Mercy to subject anyone to an experience for which he has neither the training nor is strong enough to bear. As the Ascended Masters are the Acme of Perfection, they naturally would not do anything except that which is Just, Loving and Wise.

"The attitude of one who wishes to work in conscious co-operation with the Ascended Host should not be, ‘I wish I could go to Them for instruction,’ but rather, ‘I will so purify, discipline, and perfect myself, become such an expression of Divine Love, Wisdom, and Power that I can assist in Their work, then I will automatically be drawn unto Them. I will love so constantly, so infinitely, so Divinely, that the very intensity of my own Light will open the way for Them to accept me.'

"My son, self-correction and control of the forces within the use of human consciousness is not the work of a moment, nor a path of ease, lethargy, and self-gratification, for the senses riot within the average human being, and he rebels furiously against the restraint of his lower nature which is imperative, if he is to govern these forces properly within himself, especially in his feelings, so they may be used and act only under the conscious Dominion of his God Mind.

"The saying that, ‘Many are called but few are chosen,’ is very true. All are constantly being called but few are awake enough to realize the ecstatic Joy and Perfection within the God Self, and to hear Its Voice in the ‘Light’ forever and forever calling everyone back into the Father’s House. Every individual on Earth is free each moment to ‘Arise and go unto the Father’ — his God Self, if he will but turn his back upon the creation of the human senses, and hold his attention on the Only Source in the Universe from which Peace, Happiness, Abundance, and Perfection can come.

"There is a way for all to come into contact with the Ascended Masters, and that is to think upon Them, call unto Them and They will answer every call with their own Presence of Love, but the motive for the call must be Love of the One Source, Love of the Light, Love of Perfection. If this be real, determined, and steadfast, the student will receive greater and greater Light, for the ‘Light’ knows Its own and gives of Itself, unceasingly, unconditionally, every moment. Ask and ye shall receive, knock and it shall be opened unto you, seek and ye shall find, call unto the ‘Light’ and the Ascended Masters will answer you, for They are the ‘Light’ of this world."

This book is a record of Godfre Ray King’s initial experiences with the Ascended Master Saint Germain and includes His instruction to Godfre on the Great Laws of Life. Never before, except in the Retreats of the Brotherhood of Light, has such in-depth and transcendent Instruction concerning the "I AM " been publicly given to individuals.